“The
Filter pedal is a classic 12db resonant filter that has switchable
modes (band-pass, low-pass, or high-pass.) Each mode can be modulated
either by an envelope follower, an LFO (with switchable triangle,
square, or random waveforms), or a combination of both. The envelope
follower’s behaviour is set using the Input control (which affects the
trigger threshold) and the Attack and Release controls. The LFO section
has its own Depth and Rate controls, as well as a Fast/Slow range
switch, and there’s a four-LED meter in the centre of the unit that
shows when the input is high enough to trigger the envelope follower.
Ideally, the red LED should light only on the signal peaks.” 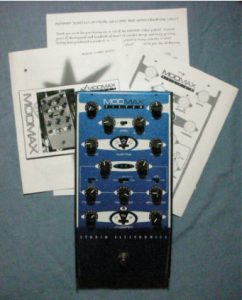