What the seller had to say [very interesting!]

“The super rare Phaser from Bell Electrolabs Limited, circa 1979 and made in England. Bell Electrolabs Limited was an English company by Michael Bell from [perhaps] 1977 until 1985. The company was located in Stockenchurch, Buckinghamshire, UK. As far as I know [seller’s words — not mine] in 1986, Michael Bell took over the pub/hotel “Princess Alexandra” (the “Alex” as it was affectionately known) and opened it as the newly renamed and refurbished “Golden Portobello” pub in Notting Hill where he still is today after 30 years.”

“Tony Koorlander designed this wonderful phaser. The phaser works with six photo cells — similar to the Schulte Compact Phaser. It is able to generate very slow phasing speeds. The pedal features speed and intensity controls and works with 18V. You can use two 9V batteries or the original “Mother” power supply (module system) from Bell Electrolabs [good luck finding one of those!].”

Additional photos and information found here. I have purchased from this seller before and highly recommend him. His ebay sales can be found here. 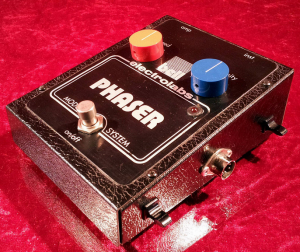 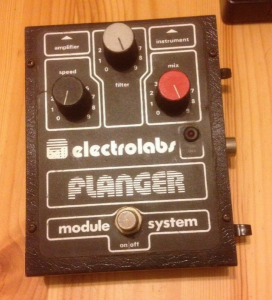