Edited from an ebay listing that I found interesting with some great
playing tips:

“The MXR
Dyna Comp compressor (or any compressor for that matter) can be a
misunderstood and underestimated effect. Think of compression
like this — an overdrive
does for your dirty sound what a compressor will do for your clean
sound (harmonic boost/more clarity).”

“Not surprisingly the first
genre of musicians to catch on to the value of compression were
Nashville greats like Reggie Young and Jerry Reed who have
used the Dyna Comp and Telecaster
combination on many trend setting albums.”

“It is reported that Pink Floyd guitarist
David
Gilmour heard the amazing tone coming from Nashville players and in
1976 incorporated a Dyna Comp into his setup.”

The key to getting
those big tones from the Dyna Comp is the sensitivity control. This
takes all of the less dynamic sounds such as:

“The Dyna Comp does this
with incredible clarity and infinite sustain. If you place the
sensitivity level around two o’clock your big country style bends all of
a sudden make sense and the notes simply hang in the air as long as
your fingers are on the strings. When you combine this pedal with
overdrive, chorus or delay the
results can be truly inspiring.”

“These
late 70s Dyna Comps have the eight-pin LM3080N. They sound a little
different than the Script ones but they are also a bit less ‘hissy’. I
recently sold a ’75 Script DC w/metal can op-amp and I really didn’t
hear a big difference between the two. The main difference i noticed is
that the Script was a bit less ‘squishy’ at lower sustain levels. I’m
not sure how everyone uses these but I turn the Output up 100 percent and the
sustain only to one. This way it acts as a limiter that also boosts my
signal. With that setting, it still compresses but never sounds too
squishy. Also, there’s still room for dynamics when playing
finger-style.” 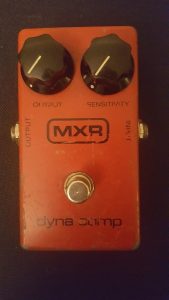 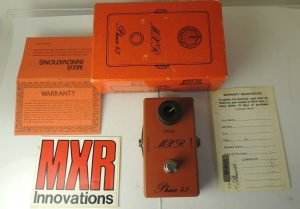 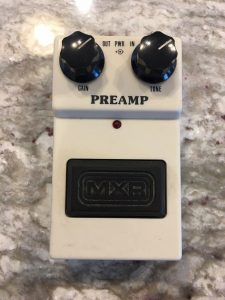 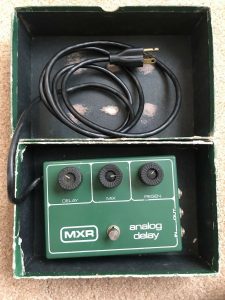 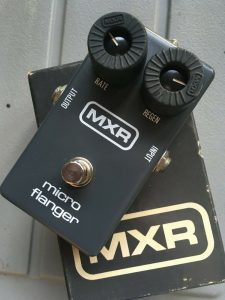