“Based on the old Systech Harmonic Energiser, one of those legendary rare 70s effects. Its an EQ device, like a stuck wah with a wide range, bandwidth and gain control. I’ve also added a fuzz circuit to this as it sounds best driving something to my ears. The fuzz is from the old Jen Double Sound Fuzz/Wah, a fixed gain silicon fuzz with an added volume control.”

“The HE is built as per the old device with a buffered bypass (sounds fine to me) and has Band (the bandwidth selected), Gain and Freq (Frequency – high or low) controls – the volume control relates to the fuzz, the gain controls the HE output to a certain extent. The foot switch engages the Energiser indicated by the LED light, the slide switch on the right puts the fuzz in or out with the effect on. Like a lot of these old devices there is a bit of signal noise in there, but hey, that’s vintage effects for you.”

“9 volt negative tip power supply only for this — no battery option.” 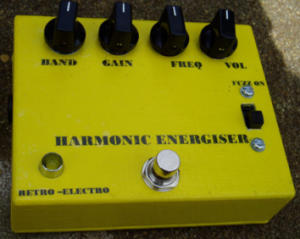 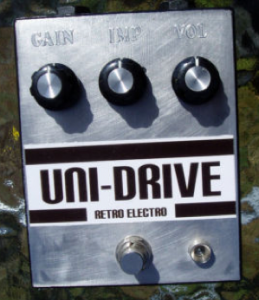