“The legendary and infamous US-made DOD Gonkulator Modulator Ring Mod/Distortion box. This pedal was only made in 1996, so they’re quite rare. No bull. And this is the even rarer ‘version 2,’ that actually states WHAT each knob does, in a kind of sober way … Yeah MY own memories of the 90s are quite blurry too.”

“Now you can buy a Moog Ring Mod for $500 or this. Plus, the FX13 also has the ‘classic’ (?) Grunge distortion built into it … and it’s fully mixable. I’ve read that that guitarist from the band Incubus used one of these on some songs and made it kind of famous.”

“This thing is capable of turning any signal routed through it into a clanging, raspy mess. From what I’ve been told the distortion is identical to the Grunge pedal, but distortion isn’t the strong point of this pedal. As ring modulators go, this one isn’t very versatile. In other words, you can’t tune it at all as the ring modulators frequency is fixed. To make things stranger, when the pedal is engaged it produces a high pitched whine at all times.”

“The whine is apparently an oscillator that is producing the untunable ring modulator frequency. Why this should be audible is anyone’s guess, but it is. As for the sound quality of this unit, it can be used to great effect in noise. It is great to change mid-rangey sounds into painfully high frequency
noise.”

“The only bad thing about the sound of this unit is that it can be picked out of a lineup of other ring modulators with ease. Anybody
familiar with the Gonkulator will recognize it immediately. The effect stands out, even when crushed under a pile of other effects. In short, it’s a one trick pony. A good trick mind you, but only one trick.” 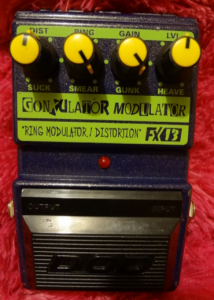 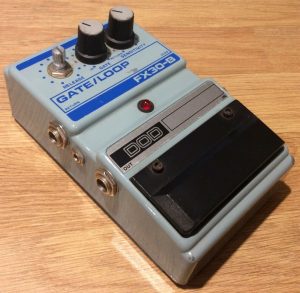 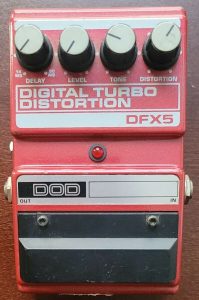 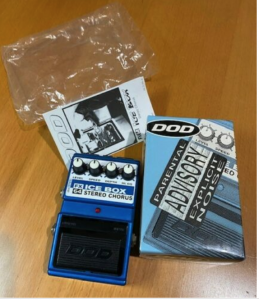 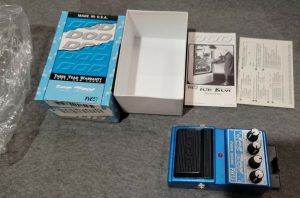 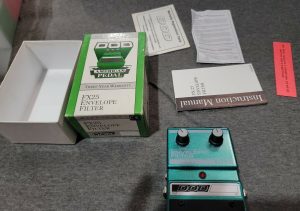